Stories of comfort, joy and achievement at Hattie Larlham

Back
In This Section

On Jason’s third birthday, his parents received a call that would change their lives forever. 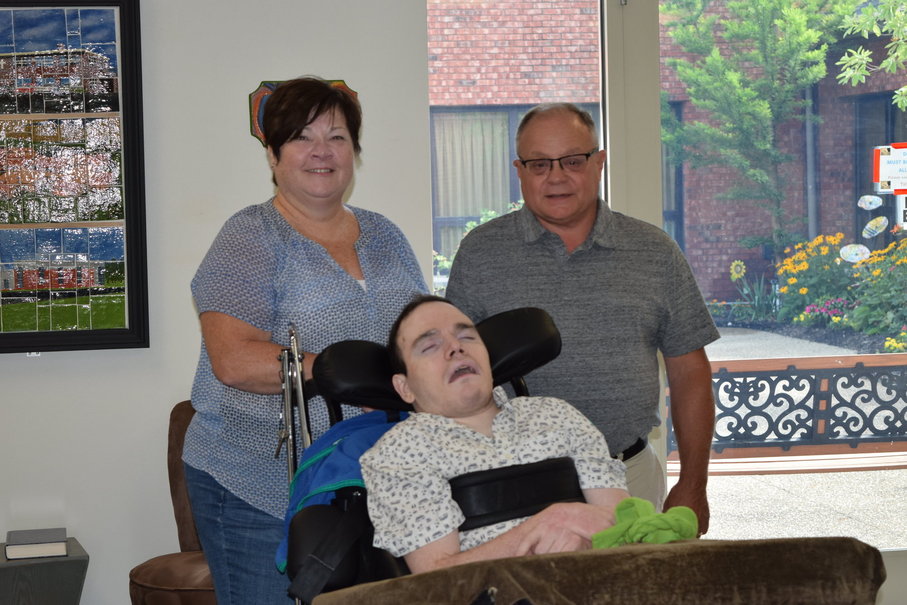 Kathy and Don Waggoner pose with their son, Jason, during a visit to the Hattie Larlham Center for Children with Disabilities.

Doctors had diagnosed Jason with a rare condition called Sanfilippo’s syndrome (MPS IIIB), which causes a dangerous buildup of large sugar molecules in his brain. The average life expectancy of someone with MPS IIIB is 15 years. It is a degenerative disease and is always terminal.

Jason’s parents, Kathy and Don Waggoner, committed themselves to ensuring that Jason always received the medical and therapeutic care he needed. As a blended family with seven children, the Waggoners stretched to keep Jason comfortably living at home for as long as they could. MPS IIIB is a degenerative neurological condition and causes a long list of progressive impairments, including loss of sight, hearing, and motor skills, as well as loss of proper internal organ function.

Jason used to be able to walk and talk but, as he grew older, he lost those abilities and began experiencing more profound symptoms of his condition. Soon, he required 24/7 in-home medical care and the Waggoners grew concerned that they would not be able to continue meeting Jason’s needs along with those of the rest of the family.

By the time he was in his late twenties, Jason had already exceeded the typical life expectancy of someone with his condition by about ten years. His parents desperately wanted even more time with him, so they chose to bring him to the Hattie Larlham Center for Children with Disabilities for the care he needed and the quality of life he deserves. 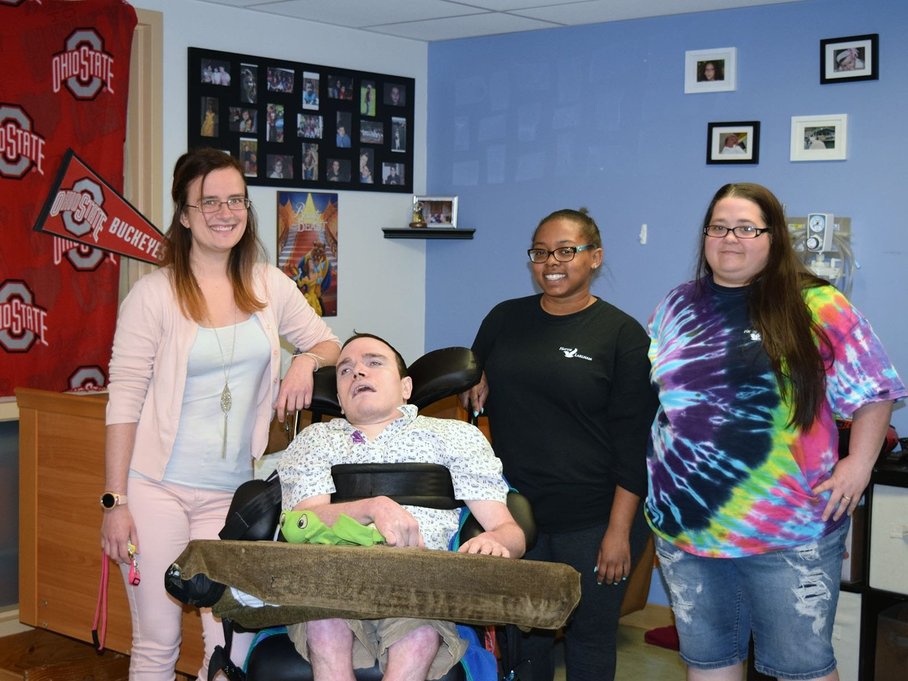 Jason poses with some of his favorite staff members in his bedroom at the Center for Children with Disabilities.

In the eleven years that Jason has lived at Hattie Larlham, Jason and his parents have developed a truly special and personal bond with his care team. Jason has now lived over twice as long as someone with his condition typically would. The Waggonners attribute that priceless extra time with their son to the care and enrichment he’s received through Hattie Larlham.

The medical and support staff at the Center continually go above and beyond to improve the lives of all Center residents. One example of this high-standard care is the completely customized pain scale protocol that was created for Jason several years ago.

“There really is no other place for kids like Jason, and we wouldn’t ever take him anywhere else.”
Kathy Waggonner, Jason’s mother

Jason’s condition causes excruciating pain that led to frequent emergent trips to the hospital. By building a close bond with Jason, Center staff developed the ability to recognize the very subtle behaviors Jason would exhibit when he first started to experience pain, behaviors that, to anyone else, wouldn’t seem out of the ordinary. These signals were closely tracked and utilized to create a custom pain management protocol, which would mean fewer trips to the hospital and a better quality of life for Jason.

This past April, Jason celebrated his 37th birthday, a milestone his parents never thought he would reach. The Waggonners attribute that priceless extra time with their son to the care and enrichment he’s received through Hattie Larlham. Their boundless love for Jason brought them to Hattie Larlham and, together as a team, we’ve helped Jason live a longer, healthier life than anyone thought possible.

Click here to learn more about the life-changing care and services provided at the Hattie Larlham Center for Children with Disabilities.