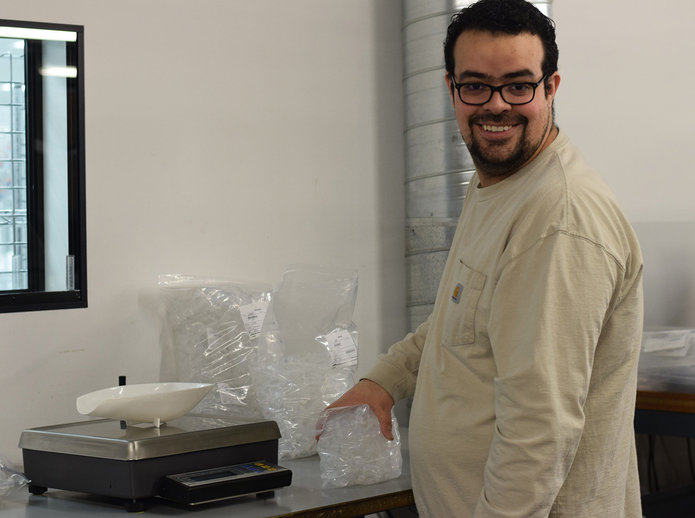 Through its cooperative work training program at Applied Medical Technology (AMT) of Brecksville, Hattie Larlham has been preparing individuals with intellectual and developmental disabilities for employment since 2015. Jose Sanchez joined the group of trainees in the summer of 2016 when he began working in the integrated program assembling tubing components for medical devices. He later moved into the distribution warehouse to take on more responsibilities. This February, Jose- along with his Hattie Larlham support team and supervisors at AMT- agreed that he was ready for the next step in his career: graduating the program and joining AMT’s full time typical staff in the warehouse.

“These programs have such an impact not only on the trainees, but also on the communities where they live and work. Having a job, learning new skills, and building relationships really boosts a person’s confidence and improves their quality of life,” says Hattie Larlham Business Relations Manager Chad Kelly. “We’re all about empowering individuals with disabilities to reach higher and pursue their interests. Through these programs, we’ve seen that their disabilities become secondary to the real work that they’re contributing in their communities and the quality relationships they build with others.”

Jose’s success comes perfectly timed as Hattie Larlham’s annual Yellow for Ability campaign celebrates National Developmental Disabilities Awareness Month throughout March. The campaign places an emphasis on what people CAN do, rather than focusing on their limitations. More success stories and information can be found on Hattie Larlham’s Facebook, Instagram, and Twitter accounts.

Jose, who grew up in Puerto Rico, moved to the Berea area after graduating high school in 2013 to live with his father. Jose quickly enrolled in English language classes at Cuyahoga Community College and stated that he put a lot of effort into learning the second language, doing extra reading and exercises to improve his grammar. Jose is naturally shy, but his supervisors agree that his time in the training program helped him come out of his shell and this confidence was a key indicator that he was becoming more ready for competitive employment. “Once you get Jose talking, you learn that he’s a really special guy who’s worked incredibly hard to overcome obstacles in his life to become successful. His family is a terrific support system and they’ve made good use of the resources in the area to help Jose succeed,” Kelly added. Jose is the second work training participant to be offered employment with AMT and Hattie Larlham is hopeful that the hiring trend will continue.

Donna, one of Jose’s co-workers, has helped prepare Jose for this transition by guiding him through some of the tasks of his job. It was Donna who first encouraged him to speak with the AMT supervisor about employment opportunities. “Jose is great to work with. He’s a hard-worker and is meticulously thorough in his work. He is an asset to our team and I look forward to welcoming more trainees in the future,” Donna said.

“I like working in the warehouse because I get to move around more while I work,” said Jose. “Here, it’s my job to count the pieces. Sometimes, if my supervisor needs extra help, I will do some counting for her. I pay attention to make sure I count it right. I used to be slower but I got better at being faster.” Despite being shy and reserved, Jose couldn’t help but admit that getting the job offer was not a surprise. He said he felt ready and that his mom, who still lives and works in Puerto Rico, and dad are very proud.

The integrated training programs are just one facet of the many resources the Employment Services department at Hattie Larlham provides for individuals with intellectual and developmental disabilities (IDD). In 2018, Hattie Larlham Employment Services helped 40 people with IDD get jobs in the community. Those people work an average of 19 hours per week and earn an average of $9.07 per hour, which is an increase over Ohio’s minimum wage.

In his new role, Jose will earn even more than that average and working full time will allow him to access to benefits through AMT. Chad Kelly, speaking on how proud he is of Jose’s progress, said, “This is a huge success for Jose and for the larger population with IDD. Each person that Hattie Larlham trains brings normalcy and acceptance to integrated workplaces, which is the ultimate goal.”

If you know someone who could benefit from Employment Services programs that are available through Hattie Larlham, or if you’re an employer looking to bring more inclusive practices to your organization, we encourage you to reach out today! Contact Chad Kelly at (234)-706-3708 or chad.kelly@hattielarlham.org.